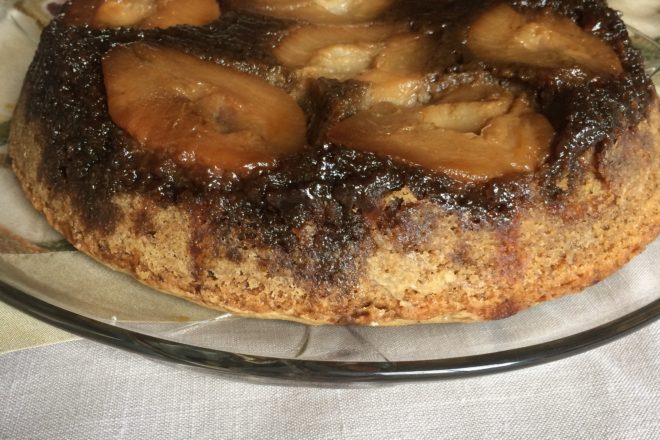 This is the second Upside-Down Cake I have made this year.  The first Pear Upside-Down Cake was from Martha Stewart.  I’ll be passing along that recipe soon.  It was quick and easy, light and sweet – a good recipe.  This recipe comes from Bon Appétit.  There are other variations that I have come across of this particular recipe.  I couldn’t stay true to it which really bothers me.  I like to follow a recipe exactly before I tinker with it.  There are some recipes that I try that I really can’t touch because they are perfect as they are.  The problem I found with this one is that it called for Pomegranate Molasses.  I searched my supermarkets and even the more exclusive ones didn’t carry it.  I came to find out a day later, that it is a Middle Eastern staple and that I could have made it at home.  I found a variation that was developed by Farm Fresh To You, you know, the organic vegetable home delivery people.  They took out the Pomegranate Molasses all together.  They probably had a hard time finding it, too!  Instead they substituted it with regular Molasses and Maple Syrup.  This made me think that Pomegranate Molasses is sweeter than regular, hence the addition of the syrup.  They, also, took out the Cardamon and added Ginger and Nutmeg.

I decided to use regular Molasses with just a drop of Maple Syrup but I kept the Cardamon.  It’s a lovely spice with pears.  I’ve used it in other cakes and it just elevates the flavor.  So, I will make this recipe again with the correct Molasses and let you know what I think.  Of course, the important thing is for you to figure out what you think, right?  But I will give you my opinion anyway, solicited or not…

Have I told you that I have become fanatical with audiobooks?  I have mentioned it to everyone else, so, dear readers, I should come clean with you.  Alongside my paper book or two, I listen to one or two audiobooks all at the same time.  But the audiobooks, if they are read well, are fabulous!  It reminds me of Third Grade with Miss Claire reading to the class after lunch.  I loved that time of day.  She was such a good reader and made everything come alive.  Right now, I’m listening to 32 Yolks: from my mother’s table to working the line by Eric Ripert.  The gentleman who reads it speaks a lovely French and will read the characters’ dialogue in English but with a French accent.  It’s so delightful.  I must say that after hours and hours of listening to the story, I’m talking out loud with a French accent.  It’s a good thing that it is only coming out when I’m in the kitchen talking to myself or the dogs.  It would be so embarrassing to do this in public.  I have caught myself in time.  Whew!  It’s a great read but I don’t think I would enjoy it half as much as listening to it on my phone.  Interestingly enough, I took French in college and really didn’t like it.  I stuck with Russian.  I am finding, lately, that I am curious of the French culture and cuisine.  I didn’t realize it, until I looked on my bookshelf and saw how many books I have bought relating to the French.  Maybe I should take up learning the language again.  For now, I will keep listening to Eric Ripert’s story and practicing my fake French accent with the dogs.

2 Tbsp. Unsalted Butter, plus extra for the pan

1/12 cups Unbleached Flour, plus extra for the pan 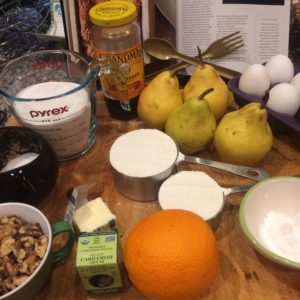 (Oops! There’s an ingredient missing in the picture.  Can you figure out which one it is?)

The Bon Appétit recipe calls for a 10″ cake pan that is at least 2″ deep.  I don’t own one, so I used my iron skillet and it worked like a dream.

Preheat oven to 350 degrees.  Butter the cake pan and line bottom with a  parchment round.  Flour the sides of the pan. 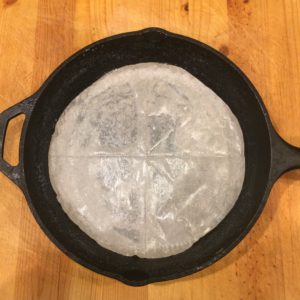 Cook Orange Juice, Molasses, Maple Syrup, 1/4 cup Sugar, and 2 Tbsp. Butter in a medium skillet (NOT THE SKILLET WITH PARCHMENT PAPER AND FLOUR! A clean skillet.)  over medium heat, stirring until Sugar is dissolved and mixture is slightly reduced, about 4 minutes.  Place Pears, cut-side up, in skillet and cook until juices release.  Do not disturb for 3 minutes or so.  Turn the Pears over and cook another 3 minutes until slightly softened.  Let cool slightly, then arrange Pears, cut side down, in prepared pan – cake pan or iron skillet.

Return the skillet with Orange Juice and Molasses mixture to medium heat and cook liquid until thickened and syrupy, about 5 minutes. 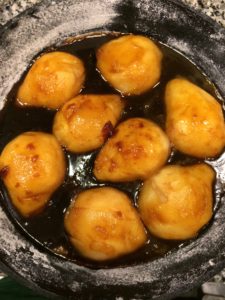 Pour syrup over Pears and freeze while you prepare the batter.  Do not freeze solid! 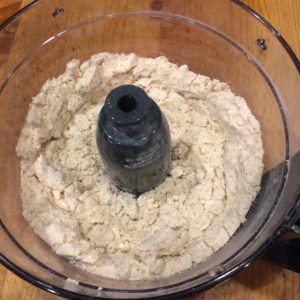 Using an electric mixer on medium beat Eggs, Orange Zest and 1 1/2 cups Sugar in a medium bowl until pale and fluffy, about 5 minutes. 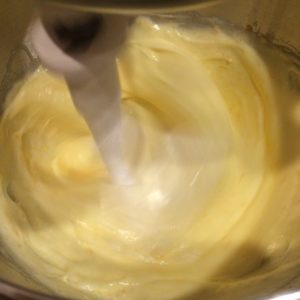 Fold in dry ingredients in 2 addition, making sure they are fully incorporated before adding more. 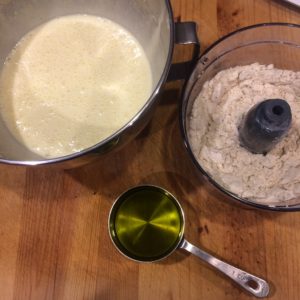 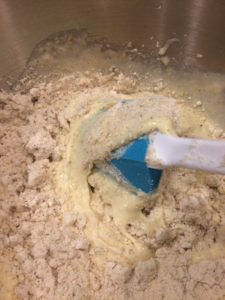 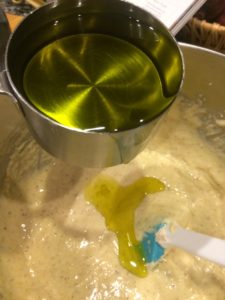 Pour batter over Pears and smooth. 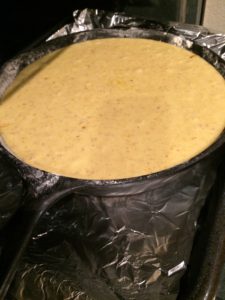 Set pan on a foil-lined baking sheet.  This is to catch any droppings.  (My iron skillet did not overflow.  So next time, I will forget the baking sheet.)  Bake until a cake tester comes out clean about 50 – 60 minutes.  Let cool on wire rack for 15 – 20 minutes.  Run a knife around the edges and invert it on to a dish.  Remove parchment and let cool completely.

It is complicated but worth it.  It has a delicate complexity of tastes that I am sure you will enjoy. 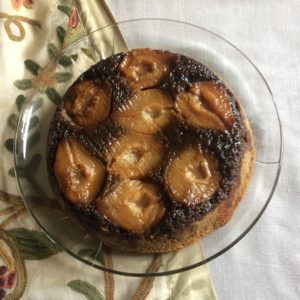 So as they say in French: Bon Appétit! – sorry I couldn’t help myself.

Copyright © 2023 The Renaissance Kitchen. All Rights Reserved.
Based in Carmichael, CA.