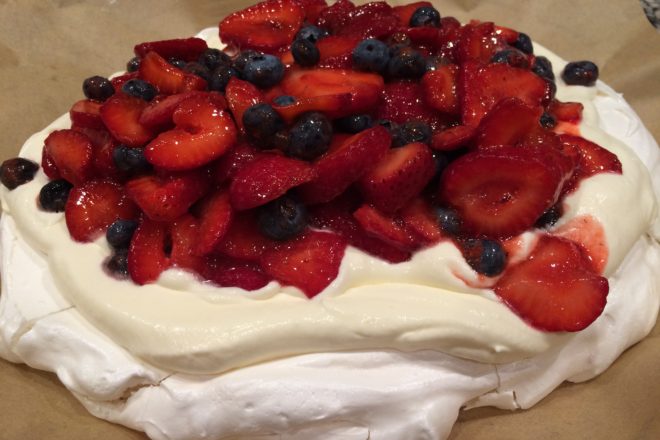 I love making this dessert for the 4th of July or any patriotic holiday.  When the kids were young, we would always get together with two other families.  The families would take turns in which house we would meet.  Then, there was dinner, something Americana. We would combine each family’s firework stash and make elaborate shows in front on the street.  Well, they were as elaborate as one can be in California with restrictions due to fire hazards.  There was always a Grand Finale of the best few fireworks picked by the men previously.   For dessert, I remember at our house, we would often have root beer floats.  Yum!  Now, that everyone is older, I can make something more sophisticated.  But don’t let the name fool you, it is a simple dessert that you can make ahead and do the finishing touches after dinner.

I like listening to music while I cook.  My Uncle Ignacio loved music.  Tío Ignacio lived in Argentina.  My aunt was a classically trained pianist.  She would always play in the evening right before bed.  Tío Ignacio had a large collection of vinyls.  He was a connoisseur of jazz, The Boston Pops and military marches.  Kind of eclectic.  I remember on Sunday mornings, he always had military marches blazing on his stereo.  Stars and Stripes Forever would blast its way through the house.  To this day, I love playing military marches and I think of him fondly.

The red and white and blue of this pavlova is perfect for a celebration.  It’s gluten free and light.  I think it’s great fun to make.  I hope you will find this to be so, too. Preheat the oven to 180 degrees.

Using a 9-inch plate, draw a circle with a pencil on a piece of parchment paper.  Lightly butter a sheet pan.  Place the parchment paper, pencil side down on the pan.  This is a guide for your meringue. Using the bowl of an electric mixer, beat on high Egg Whites and Salt with the whisk attachment.  Beat until firm.  Slowly add Sugar while continuing to beat, until firm with shiny peaks. Sift the Cornstarch into the Egg Whites. Add the Vinegar and Vanilla and fold gently with a spatula.

Place meringue in the circle on the parchment paper.  Spread within the circle with the spatula as even as possible.  Bake for 1 1/2 hours.  Turn off the oven and keep it in there for 1 more hour until cool.  Invert the meringue onto a plate. While meringue is cooking, place sliced Strawberries and Blueberries in a bowl with the juice of 1 Lemon and 1/4 cup Sugar.  Stir and refrigerate until ready to use.

Whip the Cream, Sugar and Vanilla in the bowl of an electric mixer with a whisk attachment until firm. When ready for dessert:  Smooth the Whipped Cream over the meringue.  Do not completely cover it.  Keep the edges free.  Place the berries over the Cream and drizzle the juice on top.  Serve immediately. *Tip – I don’t know about you but I will start a recipe only to realize that I forgot to leave the eggs out to reach room temperature.  Here’s a trick that I often use.  I fill a bowl with hot water and immerse the eggs in the water for a few minutes and that warms them enough to use in the recipe.  Thought of this one myself! 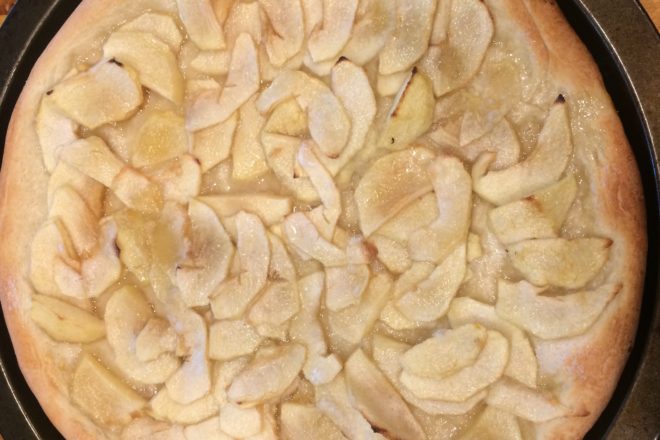 Do you go through certain recipes frequently for a while and then replace them with another set of recipes?  I do this a lot.  I’ll make the same recipes for a while until I realize that I’m making it once a week or so and then I switch for some other dish, only to do the same thing all over again.  Homemade pizza was one of those lazy Susan recipes that rotated and rotated for dinner.

Pizza has always been a favorite in my house.  My husband would have pizza every day when he was young for lunch.  (That’s the story I’ve been told.)  Have you ever seen “Appian Way” pizza?  The fact is, I had never heard about it until he bought some. I haven’t checked the market for it lately.  I’m not sure if they still make it.  It’s a little box that looks like a mac-n-cheese box.  It holds a few packets.  Yes, it’s totally processed.  There is a dough packet, a sauce packet and a little parmesan cheese packet.  My husband would eat anything that resembled pizza. Of course, he had his favorites.  He loved Appian Way pizza just the way it was, no mozzarella, just parmesan cheese.  I think it reminded him of his childhood.

I started making my own pizza dough after I received a cookbook simply titled “Pizza”.  I would knead the dough by hand, thinking that this would make the best dough, you know, doing it the traditional way.  Well, I learned better.  A standup mixer with a dough hook creates a just as good if not better dough.  We would often have kids over and each one would have an individual pizza that they could fix any way they wanted.  I once had the whole high school faculty making their own pizzas.  Good thing I had three ovens available.  Everyone brought a fixing and I provided the dough.  It was great fun!

For every night dinners, I would double the recipe.  That way we could get four 12-inch pizzas.  The fourth was always this Apple Pizza.  It’s a great and easy dessert.  You don’t have to make your own dough.  Most supermarkets carry some.  I love the feeling of pizza dough.  It’s soft and dense, smooth and not sticky.  I love handling it.  Remember that you can slow rise it in the refrigerator and make it a day ahead.  Just follow the recipe.  When you set the dough in the oiled bowl, cover it with plastic wrap and put it in the frig.  Take it out about 1 hour before you baking and continue along with the recipe.

The dough in this recipe will make two pizzas.  So, you can make a savory one and a dessert one.  Search for “Make Ahead Pizza Rolls” on the blog, if you need a simple homemade pizza sauce.  Buon Appetito! Read the Yeast packet for the water temperature that’s needed.  It does vary.  In your mixer bowl or other large bowl (if kneading by hand), pour the Water and sprinkle the Yeast packet over it.  Let sit for 5  minutes. Meanwhile, prepare a large bowl by oiling it with Olive Oil. Add Flour, Olive Oil and Salt to the Yeast and stir or mix until incorporated.  Now, use the hook on your mixer or knead by hand for 10 minutes. Place in the oiled bowl, cover with plastic wrap and let rise until it doubles in size, about 1 hour. If you are making ahead, place the bowl with the dough into the refrigerator for no more than 24 hours.

As the dough reaches it’s full rise, peel, core and slice the Apples. Once the dough has doubled, punch it.  Split in half. Remember this is enough for two pizzas. Stretch one-half of the dough out to fit into your 12-inch oiled pizza pan. Place the Apples on the dough.  It doesn’t have to be perfect.  This is pizza, not a tart, so relax. Sprinkle the Sugar over the Apples and little on the crust edge.  Dot with the Butter. The last time I made this dessert, I listened to Andrea Bocelli’s Passione CD, mostly Italian songs with a few Spanish and English ones thrown in the mix.  I love his voice. 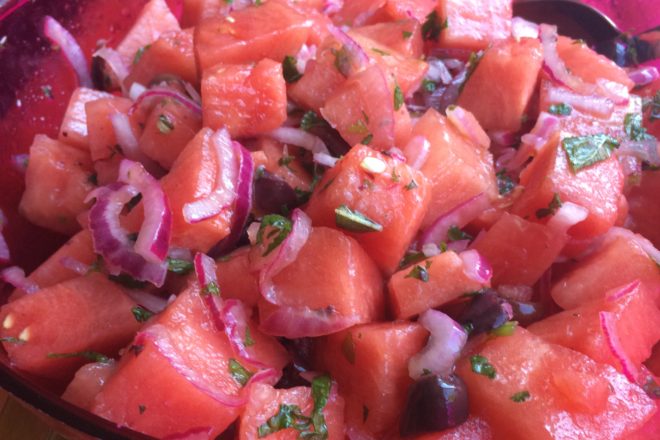 I made this Watermelon Salad for the first time, last year for an olive oil tasting party.  It was a social event for a philanthropic women’s group and their spouses.  The plan was to do my usual one hour talk and then I teach everyone how to taste.  I love doing this.  Everyone is interested in olive oil.  It’s been in the news a lot and it’s so confusing.  People don’t know what to buy and many are surprised at what I tell them.  This particular party wanted food along with the tasting.  We tasted delicate, medium and robust oils. I made a dish with every olive oil we tasted, including dessert.  It was a lot of work and I couldn’t have done it without my good friend, Gigi.  She kept everything organized and cleaned up quickly, so that we could leave soon after everyone was fed.

This salad is so refreshing.  It’s often made with cheese.  You can add that if you like.  A nice feta or ricotta works well.  I chose not to use any cheese.  I feel it is lighter and a better option with this hot weather that we are having.  One note:  the watermelon lets go a lot of juice once it is cut.  Make sure that you leave the dicing of the watermelon and tossing with the other ingredients until the last moment.  Stay cool!

Combine the sliced Red Onions with the Lemon Juice and refrigerate over night. When ready to serve, combine the remaining ingredients.   Mix gently and serve immediately. I’ve been listening to the Red Hot Chili Peppers a lot lately.  The Jupiter CD is my favorite at the moment. Write me a line if you try this recipe and like it below in the comments.

Remember to eat well, drink well and live well.  Until next time.