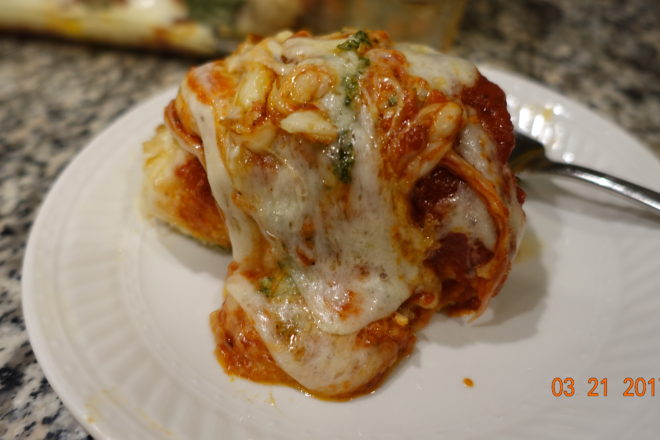 It’s been raining off and on lately.  We’ve been having beautiful warm sunny days and then the very next day, it’ll be cold and rainy.  Sometimes we get both extremes on the same day.  It’s on days like this that I go out to the garden and pick snails.  I have snails everywhere.  They eat my plants, flowers and fruit.  I put them in a plastic bucket and toss them into the GREEN garbage bin.  I figure there they are able to live by eating all the weeds and grasses that I throw in there and once a week, they get hauled off to the dump’s large compost pile.  I try not to kill insects when I’m outside.  I figure that that is their home.  The only exceptions are black widows.  I hunt them down and smash them with gusto.  They scare me.  As long as insects are outside, they are safe from me but don’t get into my house.  You never know what mood I might be in.  Generally, inside, I’m not too kind.

There is this one snail that I have left alone.  I was just thinking that I haven’t named him.  I’ve been remiss.  Two years ago, I had my house painted.  This snail had his house painted at the same time with my paint!  I hope they didn’t charge me for that.  So, his shell is painted to match my house.  (It’s a new thing in the design world.) 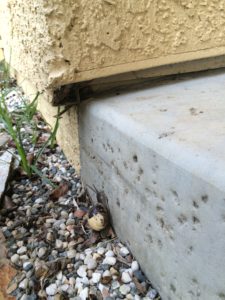 Whenever I see him, I leave him alone and snap a picture to send to my daughter.  This last time, she asked me how long do snails live?  Good question.  I googled it and they only live a year.  So this designer snail might be the son or grandson of the original painted snail.  I’ll still honor this guy and let him live in my garden. My daughter made a remark about how I see the world a little differently than most people.  This is my daughter and I know I felt the same way about my mom.  This got me thinking about this blog and you.  Yes, you.  I feel so appreciative to have you read my musings.  I realize that you don’t have to.  In fact, many of the blogs I follow, I often skip over the story because I’m really just wanting the recipe.  Unless of course, the story catches my interest.

I used to teach high school Spanish and would often start the class with a story of my past, when I was a child or teenager, of my present, something silly that I did or said, or of my family or pets that made me chuckle.  I don’t have a problem laughing at myself and my loved ones.  I’ve figured out that you have taken my students’ place.  They were a captive audience but you aren’t.  I recognize that you could pass right over this.   And so if you have made it this far, thank you.

Today’s recipe is an entree.  I thought it was time to switch a little since all I have been doing is treats and desserts.  It reminds me a little of a snail because it is rolled up into a spiral. Unfortunately, once it’s cooked it just looks like a stuffed chicken breasts.  It’s so yummy.  It looks more complicated than it is but it could  easily be a weeknight dinner.  You could prepare some things in advance like the chicken breasts could be flattened days ahead.  The marinara sauce could be store bought or made in advanced.  I used only one can because I don’t like too much sauce but if you do by all means just add another can.   Let me know if you try it.  Write in the comment section and send me a picture. 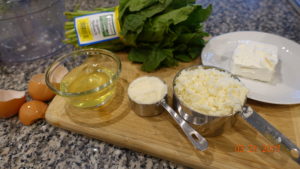 Homemade Marinara Sauce (You could always use a jar marinara but why, when it’s so easy to whip one up at home! 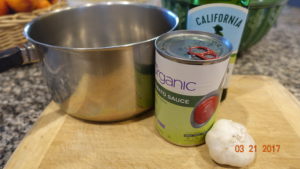 On medium heat, place Olive Oil in a saucepan.  Once the Oil is hot, add Garlic.  Lightly brown garlic.  At this time, you can leave the garlic or take it out. 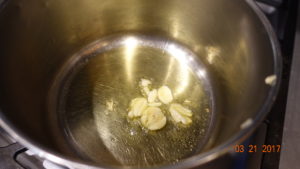 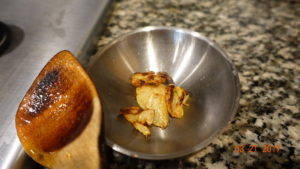 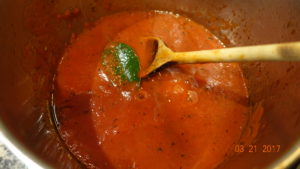 Spray or oil bottom of casserole pan.  Flatten Chicken Breasts by placing in between two plastic warp sheets and pounding until 1/4 inch thick.  Season with 1/2 of Salt and Pepper. 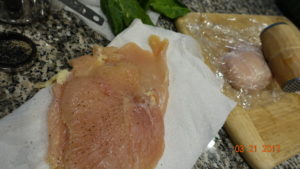 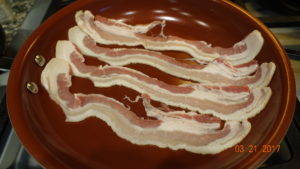 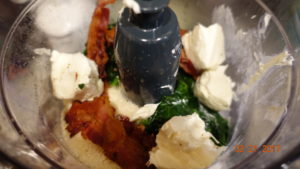 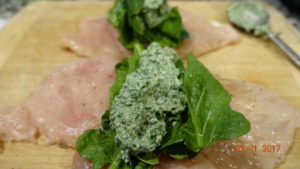 Roll up Chicken Breasts, dips in Egg Whites and roll in Breadcrumbs.  Place seam side down in prepared pan. 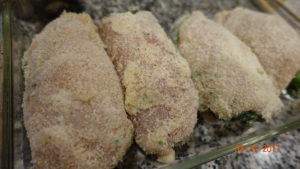 Bake 25 to 30 minutes.  Remove from oven. Set oven to broil.  Spoon on Marinara Sauce and sprinkle with Mozzarella. 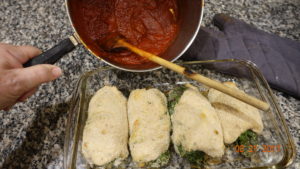 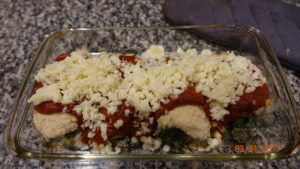 Return to oven and broil 2 to 3 minutes until Cheese melts. 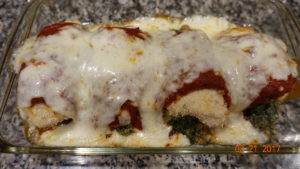 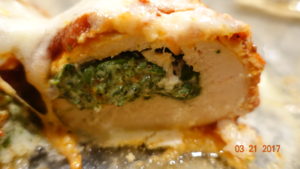 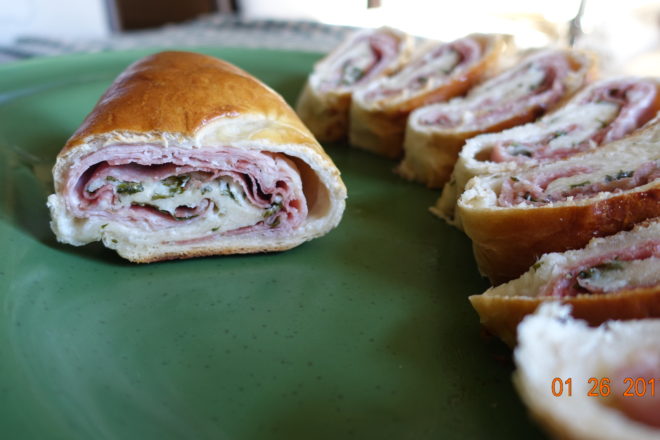 Do you do anything for Super Bowl Sunday?  Around here, we celebrate it as if it were a holiday.  My husband would take the kids out to do the grocery shopping.  Have I ever told you that my husband would always do the grocery shopping?  He wasn’t always good at it. It was hard for him to remember that a soft eggplant is too ripe but a hard peach is too green.  He wasn’t much interested in fruits or vegetables but come Super Bowl Sunday he would go all out.  So the kids loved it as they would go aisle after aisle tossing in the cart whatever suited their fancy.  There were no restrictions.  All the treats that were usually not available at the house were invited to watch the football game with us.  Sometimes we would have human guests and sometimes not.  We never had a big T.V. but people would still come over to watch the game and celebrate it with us.

Now, I’m not much of a football fanatic.  In fact, I don’t follow it at all but I like having people over.  After a 40 hour work week and cleaning the house for guests, it’s always really hard for me to prepare food.  I’m usually exhausted.  That’s why I’m always looking for make ahead recipes for company.  If you have been following me for a while, I’m sure you have gathered that I like to cook from scratch.  I’m not one for processed foods.  It can be an arduous task to make everything from fresh and good ingredients.  Super Bowl Sunday is not a day for that.  The house is usually full of processed foods already.  I like to make Make-Ahead Pizza Rolls with store bought dough, which makes it so much faster and convenient.  The recipe is on the blog just search for it.  This recipe is also a roll but more like a sandwich.  It uses store bought bread dough.  You could substitute it for homemade if you have the time.  I use the traditional fillings of mozzarella, ham and salami but you could change that to suit your taste.  Make this a few days ahead, wrap it in foil and refrigerate it.  Then stick it in an 350º oven for 15-20 minutes to reheat.  Or spend 20 minutes the day of and bake for 30 minutes and serve.

It’s fun and easy.  You make 12 servings with this recipe.  All you do is roll up the ingredients in the two loaves of bread and bake.  Then it’s TA-DA!  Sandwiches for everyone.  It’s yummy and fun to eat. 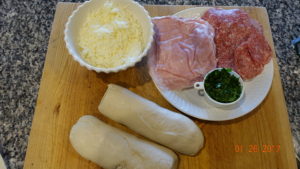 On a lightly floured surface, roll out one Bread Dough Loaf into a 14 x 10 inch rectangle. 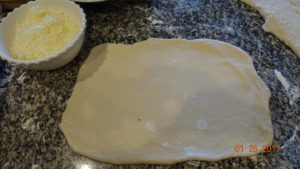 Sprinkle Dough with 1/4 cup Mozzarella, leaving 1/2 inch border all around. 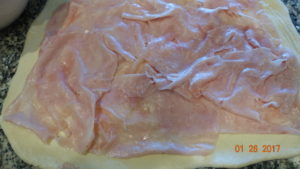 Top with another 1/4 cup Mozzarella.  Layer 1/2 of the Salami slices overlapping. 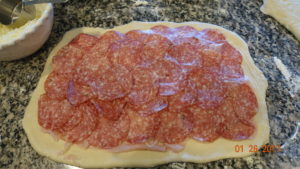 Press gently.  Sprinkle 1/2 of the Parsley and 1/4 cup Mozzarella. 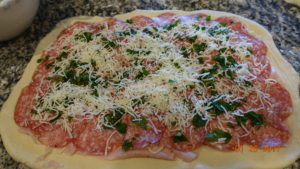 Tightly roll up from the long side.  Pinch the seams and ends to seal.  Place on the baking sheet seam side down.  Repeat with the second loaf.  Place 4 inches apart.  Brush with egg wash consisting of 1 Egg and 1 tsp. Water slightly beaten.  Cut 3 slits on top of each loaf. 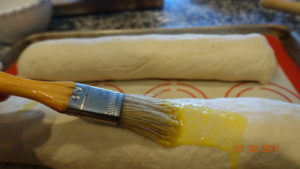 Bake for 30 minutes or until tops are brown.  Let cool. Slice and serve warm. 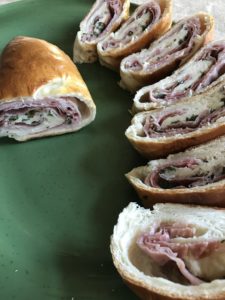 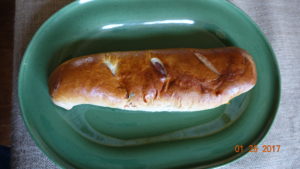