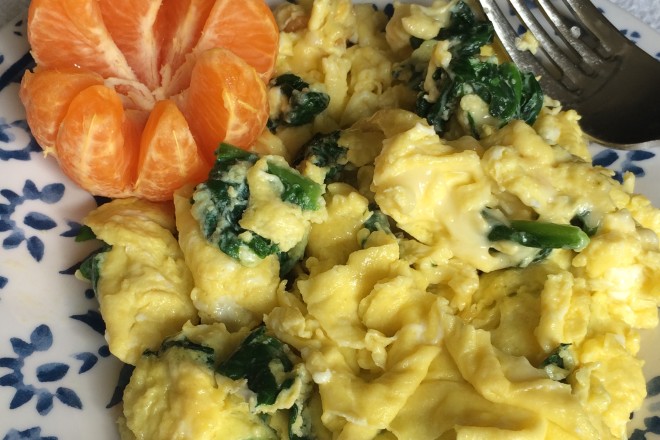 I’ve been eating this simple Scramble for breakfast lately.  I know what you are thinking…Everybody knows how to scramble eggs!  Well, you are right.  I was having a conversation with someone the other day.  I can’t remember who or where it was. It may have been at an Olive Oil Tasting event, no matter.  I was saying how I only have olive oil and butter at home.  That’s all I use to cook.  Then, this person started asking me about different foods and what I used to cook them, Like sauteing vegetables? or frying? or baking?  I kept answering olive oil.  Then, she asked about eggs and I told her, oh, butter, of course, with a smile.  So, you don’t just use olive oil on everything was her response.  Well, no, I always use butter for scrambled or fried eggs and omelettes.  Then, I watched an episode of The American Test Kitchen.  Do you ever watch that show?  I find it so interesting.  I got hooked on it after I heard J. Kenji López-Alt on NPR.  He was so interesting.  He talked about his days at The American Test Kitchen.  He wrote a book with all his findings.  It’s called The Food Lab and it’s an enormous tome.

I usually tape The American Kitchen and watch it at night when there is nothing on TV.  I watched an episode that showed a recipe called Eggs Piperade.  It’s a simple dish of scrambled eggs with sauteed onions and peppers. The interesting thing was that the cook chose to use olive oil in the eggs and the pan.  She claimed that the EVOO made the eggs fluffier.  I sometimes add some milk to my eggs as I beat them but not always.  She also said that overbeating the eggs makes them tough.  This is totally against my beliefs.  So, I tried adding olive oil and I have to say that i think they are fluffier than usual and very tasty.  My scrambled eggs were always tough because I don’t like runny eggs and so I overcooked them to prevent that from happening.  Now, they are still light and well cooked.  Try it next time, you’ll be surprised at how good they are.

1 oz. Cheese or to taste

Rinse and chop the Spinach.  Cube or shred the cheese.   Beat the Eggs with 1 tsp. Olive Oil. Heat 1 – 2 tsp. of Olive Oil in a skillet on medium-high.  Once you see the oil spreading on the pan, add Spinach and cook until wilted. Add Eggs and Cheese.  Cook stirring for 30 seconds.  Lower heat to medium-low and continue to scramble the eggs.

Salt and Pepper to taste.  That’s it!