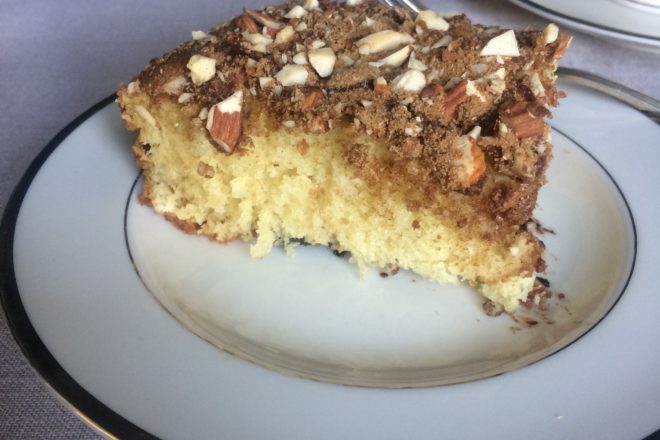 I have been noticing that a lot of my friends and acquaintances have been thinking that I am a baker.  I really consider myself more of a cook than a baker.  I’m baking so much now because I discovered the joy of using olive oil in baked goods.  I’ve always cooked with olive oil but this is very new to me and I’m enjoying the exploration.

I’ve often mentioned that my mom had a wonderful hand with pastries and desserts.  Mom never slept more than three hours every night.  This would allow her to bake in the mornings while everyone else slept.  It didn’t make her happy.  She always wished she could sleep longer and this was often our morning topic of conversation.  If she wasn’t shopping in the afternoons, she would also bake then, while I was in school.  So the delicious pastries and breads showed up out of no where.  I never saw her make any.  She was also a great cook but that’s another post.

I grew up having cleaning chores but never had much to do in the kitchen besides the dishes.  I do remember going through mom’s cookbooks and ogling the pictures.  There were a few times where I did create a dish or two.  I remember making tuna sandwiches. Tuna sandwiches are a sensitive topic with me.  When I was in school, I often had them for lunch.  Mom would make my sandwiches but in Argentina, they don’t make tuna salad.  So my sandwiches consisted of bread smeared with a little mayonnaise and chunks of tuna in the middle.  I was teased every time I ate one.  The kids would say that I was eating cat food and laughed at me.  When I was 8 or 9, I had tried tuna sandwiches at friends’ houses and wanted to duplicate them but I didn’t know how.  I made lunch for my parents one day.  Tuna Salad Sandwiches were on the menu.  I tried to duplicate the crunchy and sweetness of “American” tuna sandwiches with what I could find in the pantry.  Resourcefully, the sandwich filling became tuna mixed with mayo, chopped walnuts and raisins.  It wasn’t bad.  My parents smiled as they ate them.  I ate those at home for years. That was the first recipe that I ever created.

I caught some flu bug a few weeks ago and found myself sitting on the couch watching daytime TV.  I seldom have the TV on during the day but I was not feeling well enough to even read.  You can imagine what I watched, that’s right, mostly cooking shows.  I cannot believe the garbage that they are promoting on these shows.  I wasn’t watching the food channels, not shows like the Barefoot Contessa or anything.  I was watching, well, I ‘m not going to name them, but the popular shows on the regular stations.  I was appalled at the disregard for the nutritional content in the recipes.   These weren’t desserts or treats.  They were showing main dishes. Ooey, gooey cheese, butter, tremendous amounts of carbs were everywhere.  I’m all for fats.  I love my cheese.  But these recipes had little to no value to them.  I’m sure they tasted great but …

Today, I’ve posted a coffeecake.  It’s not low in calories but I think it has many wholesome ingredients that makes having this treat on a weekend morning worth it.  The chocolate chips sink to the bottom giving almost a crust on the bottom.  I would make this for my son to entice him to get out of bed and ready for school.  It helps getting dressed quickly when the house smells yummy.  I hope you will agree. 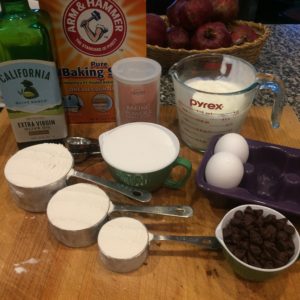 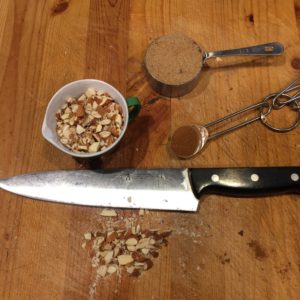 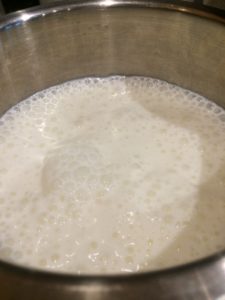 In another bowl beat Eggs and Sugar until light yellow and fluffy. 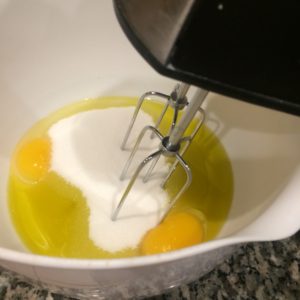 Sift Flour and Baking Powder into Egg mixture and blend. 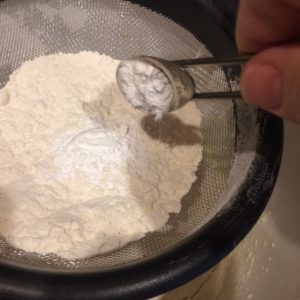 Fold in Yogurt and Chocolate Chips and smooth.  Pour into pan. 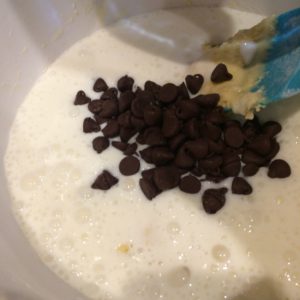 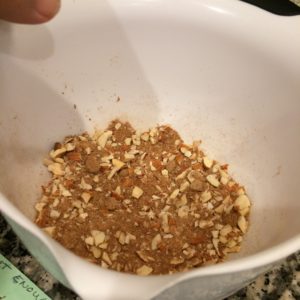 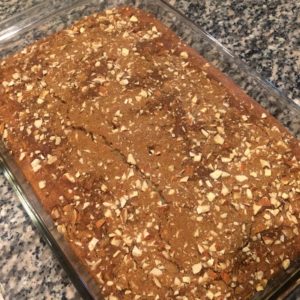 Bake for 25 to 30 minutes until an inserted toothpick inserted in the center comes out clean. 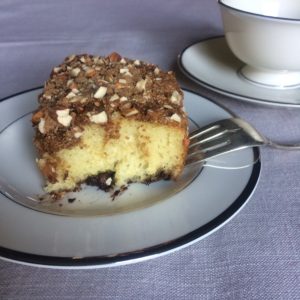 Until next time, eat well, drink well and live well.